A Tribute to Nona 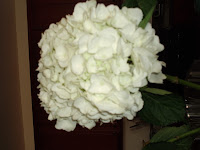 My dear grandmother, Nona, passed away a couple of weeks ago. I had the privilege of making some remarks at her funeral, which was actually very cathartic. I always look at people who speak at the funeral of a loved one and think, How is he/she getting through that without breaking down? Well, one way I got through it was keeping it light and remembering some of the funny things. But all said and done, it actually felt good to tell everyone some things that I knew about her that perhaps they didn't. It was helpful to me to be able to show them a bit of the lady I knew as grandmother and friend.

"Lady" is the key word. She was fun, a good Christian, had a good sense of humor, and so sweet. She always made others feel at ease in her presence, no matter what. She was very generous and kind, and was always interested in other people's lives and experiences. She had a degree in social work from USC, and went right to work as a social worker out of college. After marrying my grandfather, she became a full-time housewife (and eventually, mother to 3). She spent a lot of time doing charity work, though, as I remember from my childhood.

But above all, she was always a lady. I try to be more like her, and I fall flat on my face most days. During the summer I was studying for the Bar and taking the Bar review class in Columbia, I stayed with my grandparents so I could be closer to USC and cut down my drive by at least half. In late afternoons, I would take a break from studying and sit with Nona in the library. We would have sandwiches and tea, and watch re-runs of "Murder, She Wrote" and "M.A.S.H." My grandfather would usually come in as well, and join us for a light, early dinner. Having the comfort and stability of my grandparents' support was most certainly one of the reasons I managed to pass that wretched three-day exam.

I miss her so, so much. I know I always will. But I think of my young son , my cousin's young daughter (and the new baby brother she will have in a few months), and I realize that the circle of life goes on. I have no regrets. I am thankful that I took full advantage of the 38 years I had her in my life. I have thousands of wonderful memories that warm my heart. And I have the blessed assurance of knowing that Nona is Heaven, and I will see her again.

If your grandparents are still living, I urge to take full advantage of being with them. Ask their opinion on your life decisions, or on what to wear to an event, or where to plant your roses. Ask them to tell you stories from their childhood. You'll be glad you did.
Posted by Perrin Cothran Conrad at 12:15 PM No comments:

As tornadoes ripped across our country last week, I watched and prayed for those who were affected, and for those who seemed to be in the path of impending danger. I encourage everyone to send donations to Operation Blessing, Salvation Army, or the org of your choice to assist with aid to the victims.

We were miraculously blessed that we did not receive the wrath of those storms. As the storm rolled across the south, we braced, knowing we were directly in the path. I grew up with a nervous nellie dad, always having to call when I arrived somewhere. Many a time, I had road trips planned when one of the days would threaten a 20% chance of rain. My dad would shake his head and advise against going. A bit overly-cautious. But after experiencing Hugo in 1989 as a high school senior, I tend to consider safety a bit more. When you have spent the night listening to the high winds and passing tornadoes, then having a tree fall into your roof, you tend to take these things a little more seriously. I thought I was going to die that night, and later found out that the "BOOM CRACK" sounds the house was making are usually what you hear before a house explodes in a tornado. I adopted a similar "batten down the hatches" attitude and don't even like to leave the house in rain now, if I don't have to.

So, what did I do as an adult? I married a First Responder. Being a survivor of Hurricane Andrew, my emergency personnel husband is even worse than my dad when it comes to being safe and taking precautions. When he's at home and hail or tornadoes threaten, he acts as though Armageddon is upon us every time. In particular, I can remember one storm in the last few years where the weather was amply troublesome. Forever emblazoned on my memory is an image of my husband sitting on our porch, wearing a bicycle helmet, and wielding a baseball bat in case any errant hail were to blow up on the porch in a missile-like fashion and break our sliding glass doors.

When my husband is not at home with us during a big weather event, he will call me with detailed instructions about what to secure in the yard (because anything can become a projectile in high wind) and usually tell me to go to my parents' house to take cover. (Their house is older, larger, and infinitely sturdier than ours.) Surviving a major storm like Andrew or Hugo will change you forever, and not necessarily to make you more sane.

So when the storm was approaching last week, it was certain that we would get heavy rain and high winds, at the very least. When the storm reached Columbia, about 2-3 counties over, there were still tornadoes spinning off of it. I took my son to school and opted not to stay for a reception honoring a lady who is leaving the school. I told everyone I wanted to stay, but had to go home and "get ready for the storm." They all looked at me like I was crazy. They acted like I was squawking like Chicken Little. Some didn't even know we were due to get a storm. The rest of the world was business as usual, while I was occupied all day by the Weather Channel and phone updates from family members. I, too, have become that nervous nellie. I felt foolish when I went back to pick him up later in the day, and not a drop of rain had fallen. "Well, I guess we didn't get that storm after all," one of the teachers said to me. But all my potential projectiles were secured, gosh darn it.

My husband was not at home with us, but my in laws were in town, staying in a hotel. Of course, it was suggested that my son and I go to the hotel so we could hide in the sturdy concrete stairwell. We did not do that, but did go to my parents' house to watch the Weather Channel. My mother was due at a state garden club meeting in Columbia, and was all set to get on the highway and drive. My father and my husband were all over her not to go . . . "People are out there getting pelted with hail!" "I don't care if you have to make a presentation. You can't make it anyway if you're DEAD!" High drama. My mother waved them off and got in her Range Rover, in which she believes herself to be invincible. Okay, those cars are like tanks, but I don't think they could take on a tornado. Check the pictures of Tuscaloosa if you don't believe me, Mom. But she was convinced that we weren't going to get the weather at all. And she was right.

So off she went. Periodically, she would call and give us updates on the sunshine. Absolutely NO inclement weather in her path. None. And I will be the first to admit that the radar looked fairly scary when she left, but the storms just turned north. NC and VA received the hit for which my chicken little family was braced. I headed back home in a little drizzle of rain, the only bad weather we got. Still, I guess I'd rather be Chicken Little than the mouse who doesn't know he's in the snake's cage.
Posted by Perrin Cothran Conrad at 11:31 AM No comments: