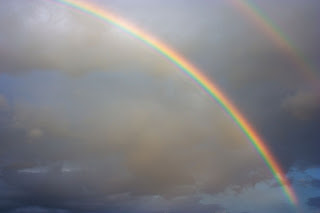 Following the horrible tragedy in Connecticut on Friday, many parents reticently took their children to school this morning.  The event opened up new thoughts, fears, and nightmares that most folks never had before.  Haltingly, cautiously, prayerfully, perhaps with a few more hugs than usual, parents got their children ready and put them on the bus or drove them to school.
But as I ate my breakfast and scrolled through my Facebook news feed, I noticed tons of friends in the Charleston area posting pictures of a beautiful rainbow that they spotted on the morning drive.  Two pictures even showed the end of the rainbow feeding into the rooftops of two different elementary schools.  In one other photo, the rainbow was clearly double.  All such photos that I saw were taken either by parents who were en route to drop off their children, or had just dropped them off.


This reminds me of the very first rainbow in Genesis 9.  God established the rainbow as a sign of His covenant with the earth and all living things in it. “I have set my rainbow in the clouds, and it will be the sign of the covenant between me and the earth.” (Genesis 9:13, NIV)   He promised that “never again will all life be cut off by the waters of a flood,” (Genesis 9:11b, NIV) and I believe we can translate it to our current trepidation.  Along with the pictures posted this morning, Facebookers wrote such statements as “timely sign of good and hope” and “Thank you, God . . . Your promises are forever!”  One posted by the local newspaper said, “A timeless reminder of hope.”


These statements are true.  They are right.  Even some who do not believe in God consider a rainbow to be a sign of hope.  They see it more culturally than spiritually.  Personally, I recoginize its origin, and in doing so, I find true peace and comfort.  There is One who cannot be knocked down or destroyed, will not break His promises, and can always be trusted.


Shalom
Posted by Perrin Cothran Conrad at 8:00 AM No comments: