How low can you go?

Clothing and toy swap events are enjoying increasing popularity, especially in our limping economy. The process is great . . . you clean out your closet and donate items that you don't need anymore, then collect tickets for said items (usually one ticket per item). Then you attend an event to pick out other people's discarded items that you want or need. The items usually "cost" two or more tickets, with opportunity to buy additional tickets, if you like, with proceeds going to a charitable cause. It's really a win-win for everyone involved.

This week, I donated some items to such an event, and attended last night to hopefully snag some items for my son, and maybe for myself, too. When I got there, I quickly realized that most of the stuff there that was my size was people's junk, like some eighties blazers with shoulder pads and rolled up sleeves. There were also some really good items, and thank goodness I got there early, so I could grab them! I skipped the navy blue evening gown, because I don't go anywhere that requires such attire anymore, sadly, except for the occasional wedding. There was nothing for my son, as all boy's clothes were either 5T or infant.

Here's what I DID get: some Clark's clogs, some cute pink pants, an AWESOME lime green LL Bean sweater, a Talbot's sweater, a cute lime green blouse, and . . . drum roll, please . . . a halter top. If you know me, you are going, "Huh?" right now.

Here's how it happened. I approached a table of sleeveless shirts. I never go sleeveless, but sometimes like to layer things, so sleeveless can be handy for that. It was white, tubelike, with the ties behind the neck. The tag said, "White House Black Market," a nice, expensive store. I thought it might look good under a jacket or shirt or something. When I got home, I tried it on. Well, the neckline plunges farther than any bathing suit I have ever worn. If it were cut any lower, I think I would be looking for my belly button in Argentina.

Even if I wanted to go around dressed like this, let's just say I am not well-enough endowed for it. I thought of wearing this top as some type of undergarment, but then there are the conspicuous ties behind the neck. I thought of giving it away, but then decided that no one needs to walk around in this thing. Not many women could get away with it, and believe me, if I take it out of commission for the women who DO look good in it, God-fearing Christian men everywhere who try not to ogle women will thank me. And their wives will thank me even more!

I see why it was on the table at a swap event . . . perhaps the person donating it received it as a gift. Perhaps she bought it to wear on girls night out until her husband saw her in it and told her never to wear it outside the house again. Maybe it will make a good cleaning rag. Or a slingshot.
Posted by Perrin Cothran Conrad at 8:55 AM No comments:

My little boy started Mother's Morning Out today. This was a big deal, because it's sort of like a pre-preschool. He's only 21 months old, so I was impressed when he came home today saying, "A, B, C!" Nevermind that I have been singing the ABC's to him since he was so tiny that he couldn't do anything but lie on a blanket . . . the teacher managed to get him to say, "A, B C" in only 3 short hours! He acts like he had a blast. From the schedule, it seems they had a PE class, a music class, coloring, learning letters, and a nature walk. That's to say nothing of the 30 minute snack and collective hour of free playtime and playground time. They have a carpool line and everything - it's very grown-up like a real school!

Now, he did get into some fire ants on the nature walk. Apparently he took it much better than I did. But all in all, it was a great first day. Also, I noticed that my child was the only one with a diaper bag today . . . the rest of the children had little backpacks and other school-type bags. I wondered . . . what's in them? Probably the same thing that's in Sam's diaper bag. When I arrived home, I found Sam's "nature walk bag" with his name on it in the diaper bag. This contained 2 sticks of varying textures, one piece of tree bark, and one crumbling leaf. I had to wonder, were these things that Sam picked up and put into his bag? Did he pick them up and put them in his mouth (more likely) until the teacher directed him to take it out of his mouth and put it into the bag? Did the teacher and her helper take the 12 toddlers out there and say, "Now, everyone find a leaf." and watch them all dutifully search out a leaf and drop it into the bag? Yeah, right. Did the teacher and the helper put things in the bags for the children? I have a vision of the teacher, the helper, the nursery director, a priest, and maybe 3 or 4 others herding these little tiny people who only have one thing on their agendas: RUN. I picture one of them periodically darting off toward the parking lot to create a diversion while a second one crouches and hides behind an AC unit and yet a third starts to take off his pants and use a planter as a potty, while a fourth somehow gets the sanctuary door open to squeal giddily into the chapel during a Monday morning prayer service, while my son . . . stepped in an ant pile with both feet. The whole "nature walk with 12 toddlers" idea seems very brave to me. Maybe even insane. But I know they actually did it, because we have the ant bites to prove it.
Posted by Perrin Cothran Conrad at 7:53 PM No comments: 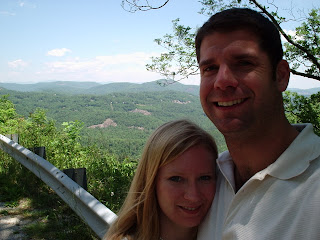 I have always been a little slower than my friends to plug into technology and high tech stuff. Just a couple of years ago, my best friend Marian and I were laughing about the word "blog" and wondering what a "blog" was exactly. Sounds funny - BLOG. It reminds me of the onomatopoeic word "BLOP," which brings me again to Marian and a story we made up about a Strawberry Shortcake-themed wedding gone awry with fruit melee and flying meringue. The story was inspired by a nervous Miss America contestant from somewhere like Oklahoma who told judges that she and her sister used to sing the Strawberry Shortcake song . . . which she then did, on national tv, finishing with a twangy "nee nur nee nur neeeeee." The sound that followed was frantic beeping . . . Marian and I were calling each other at the same time to say, "DID YOU SEE THAT? NEE NUR NEE NUR NEEEEE!"

So it has been a while in coming, I suppose, but the natural progression of my writing career has brought me here. Those of you who do not know will ask, "You SAY you are a writer, but I know you as ___________ (fill in the blank with lawyer, stay at home mom, Chip's wife, jewelry distributor, former travel agent, former secretary at Dixie Crystals, etc) I had some of my short stories published in the Agnes Scott newspaper when I was in college there. In my mid-twenties, I was also a columnist for South Carolina Homes and Gardens. Most recently, I have published a short book called A Quiet Cup of Tea, which was illustrated by my talented mother. See http://www.mosquitocreekpress.com/ I have been working on a novel this year, and am about halfway through. It's hard to find the time to write with a toddler boy in the house, but I do manage to write at least a couple of days per week. Hopefully, blogging will keep me in the habit of composing!
Posted by Perrin Cothran Conrad at 6:16 PM 1 comment: