When my husband and I were dating, he mentioned to me one day, "By the way, I know how to highlight hair, so I can do that for you." I remember looking at him quizzically and letting him know politely that I would not need for him to do that.

A few months after we married, I was brushing my hair one day. Chip was sitting in the room, studying me like a College World Series baseball game. "How come you never have to color your hair?" he asked me.

"Because I don't color my hair," I answered.

What did he mean by asking what I meant?! I thought I had laid it out in black and white. People either color their hair or they don't. "I mean that I don't color my hair." He was still confused, so I pointed at my head. "This is the color of my hair." Still a stymied stare from my husband. "When it grows out of my head, it comes in this color." Apparently he did not realize that blonde is a color that occurs in nature. All the blondes in his life previously had, ahem, altered their locks from another color.

Other realizations branched from this . . . why I really can't get a tan, why every drug store product I buy is marked "For Sensitive Skin," why I never actually get speeding tickets even if I get pulled over . . . okay, well, bleached blondes probably get out of speeding tickets, too. But I digress. By the time we had been married for about a year, I had heard the phrase, "Boy, you really are blonde, aren't you?" at least five times, and usually following some brilliant ditzy move on my part (more to come later on that). I hear that phrase more and more with each passing year. And it's true.

We have been watching a lot of "Finding Nemo" at our house recently, thanks to my son. If you have seen it, you know that Dory, the blue Regal Tang, is the sweet, well-meaning fish with a serious problem. Her short-term memory is almost non-existent. *Sigh* She reminds me a lot of myself. And go figure, she admits while talking in her sleep, "Yes, I'm a natural blue." Stay tuned in the days to come, and I will tell some good blonde tales on myself. I'm definitely a natural blue, er-blonde.
Posted by Perrin Cothran Conrad at 2:25 PM No comments:

Email ThisBlogThis!Share to TwitterShare to FacebookShare to Pinterest
Labels: blonditude

Moderation. I never seem to grasp it all that well when it comes to my work. There are some days where I sit at my computer, and nothing comes. I'm sad, or I'm tired, or I'm distracted. I keep flipping away from that blinking cursor to my Facebook page, to Twitter, to the Talbot's sale, and Oh wait, I was going to google search recipes for stir fry for the next supper club . . . You name it, I'll find it when the creative wave is not washing over me.

But sometimes, like today, I just can't get it all out of my head! I can't type fast enough, and I can't put the computer down. I'm revising old pieces. I'm jotting down outlines for new stories. I'm writing a couple of chapters in my novel. I'm almost afraid to turn off my laptop and go to bed, because I don't want to stop the flow. Because I know that tomorrow may be another one of those other days. I wish I could bottle up some of that creativity on the overload days and save it for those uninspired days. If any of you creative types out there know how to do that, please let me know.
Posted by Perrin Cothran Conrad at 6:03 PM No comments:

So my husband, Chip, was not at home yesterday afternoon when the famous lizard-slaying by my 3 year old occurred. (See post below, if you don't know the story!) Chip was not slated to be home until today. I told him the story over the phone, and of course Daddy was beaming with pride at his son's First Kill, and instinct to protect Mommy.

But there remained the matter of the dead lizard on the door stoop. "What did you do with it?" he asked me. I exclaimed that I had done nothing with it, nor did I plan to. He could take care of it upon his return home today. "No!" he fussed at me. "It will bring more bugs, which will bring more lizards, and . . . look, do you want a snake on the back porch?" Hmm. No. No, I don't. He insisted I HAD to dispose of the little carcass right away.

I stood there with the broom, a safe distance away. Ewwwwwww, I said to myself. If you didn't know that I have an irrational fear of lizards, again refer to the post below. I considered the possibility of sweeping it outside and having its little body decay under my Hosta. Ewwwww. I decided Chip's shovel would be better. Then I could scoop it up, carry it across the yard, and fling it over the back fence into the green space.

I assumed my stance, shovel in hands. What if it isn't all the way dead? What if I wake it up? It could spring to life, flopping and jerking around. It could race up the handle, charge at me and attack faster than my reflexes could drop the shovel and carry me out the porch door to safety. Barnwell might come back with revenge on his mind. Night of the Zombie Lizard and all that. See? I told you my fear of them is irrational. I just couldn't do it. Could. Not. Do it.

I went next door and found my neighbors just driving up in their car. I explained the situation - dead lizard, irrational fear, need to dispose of the body. I already felt like a village idiot. But to my further shame, the female was the one who jumped out of the car and said, "Oh, I'll take care of it!" Dear, sweet Mary Lou. I already thought she was a great neighbor, but now she's a hero, too.

As we rounded the corner to the back porch, I was explaining that his name was Barnwell and my son had slain him with a juice cup. Now she thinks I'm a wimp and crazy, too. Sometimes I just give too much information. Anyway, she spotted the shovel and asked, "Oh, were you planning to bury it?" No, I told her, I was just going to throw it over the fence into the green space. "Ah," she said, then she proceeded to pick up it with a grocery bag around her hand, the same way one might pick up dog waste. She wrapped the bag around and tied it off, balling it up in her hand. She was not bothered one bit by the fact that there was a potential Zombie Lizard in her very hand. He could have bitten her right through that thin plastic bag. She even stood there for a minute and chatted before heading home to throw it away! I know, I know, it was a dead lizard. I have a wild imagination. I probably need to address this with a therapist.
Posted by Perrin Cothran Conrad at 6:43 AM No comments: 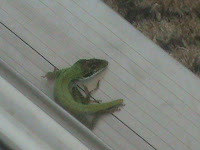 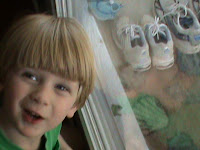 I was in shock at my little boy's bravery, but so proud of him for coming to my rescue. Next, we will be outfitting him with little snake boots and building him a tree stand.
Posted by Perrin Cothran Conrad at 5:38 PM No comments: