Sometimes, I wish I were a cop.

I witnessed someone shoplifting yesterday.  And I was powerless to do anything about it.  *Sigh*  I can't fix the evils of the world.  There is only One who can.

My three-year old and I were sitting in the car, waiting for my husband to come out of the grocery store.  Two men pulled up in a nice car (much nicer than mine - probably because they steal all their snacks, so they can afford a big car payment) in the space diagonally in front of me, to the left.  The passenger had on a football jersey.  He got out and walked briskly into the Dollar Tree, which was also diagonally in front of me, to the right.

Less than 60 seconds later, he walked VERY briskly out of the Dollar Tree.  Wow, I said to myself, that was fast.  The cashier must have been high on Jolt cola . . . then I noticed his hand under his shirt, along with a rawther large bulge.  Ahhhhhhh . . . all became clear now.  He was quick, because he didn't bother to check out!  He hopped back into the car and immediately brought several small bags/boxes of snack-looking items out of his lap and into view.

Mmm.  A reprobate, and not even good at it.  This was not a young guy, either.  It's not like you could argue inexperience.  He was old enough to have been at it for a while.  The driver, who looked to be in his 50's or 60's calmly backed out of the space and drove away like nothing was amiss.  He either didn't realize he was driving the Dollar-Tree-Snack-Heist-Getaway-Car, or it was all in a day's work for him.

I didn't get the license plate, and I couldn't get out of the car to alert the Dollar Tree employees . . . such is the life of a mother.  You have to think of the safety/comfort of the little person in your care first.  But my question is this:  If you're going to go to the trouble of stealing, why not go into Best Buy and go for a tablet computer?  Still fits under the jersey nicely.  And you'd be much less angry with yourself if you ended up sitting in jail over a $500 item than $3-4 worth of stale, off-brand snacks.

Just a suggestion to any of the scofflaws and reprobates out there.

But oh yeah, keep this one in mind:  Hebrews 10:30-31 For we know Him who said, "Vengeance is Mine, I will repay," says the Lord.  And again, "The Lord will judge His people."  It is a fearful thing to fall into the hands of living God.

Yup.  I'd be more worried about that than jail.
Posted by Perrin Cothran Conrad at 9:48 AM No comments:

Lately, I have been super-focused on getting my second book out this fall.  I just realized the other day that I had not blogged in a few weeks.  Almost a month.  But I am now waiting for the results of the editorial review by my publisher, and I have a little more time on my hands.

So yesterday, two of the highlights in my day were 1) getting my new lip gloss from my Avon lady and 2) attending Ladies' Night at the ATP Gun Shop and Range, where they teach you how to "shoot like a girl."  I had not shot a gun in nearly 5 years, so the results shocked me a little (see photo below).  Granted, I grew up around guns, because my father hunted, and I was taught from a young age how to shoot a gun and handle one safely.

Rewind:  It's 1980, and I'm turning 8 years old.  My Dad comes home a little after dark and tells me to come out to the back of his car.  I follow him out there with some anticipation, figuring there is a surprise for me in the trunk.  Maybe a Barbie townhouse.  Maybe a new bike with pink and purple streamers.  The trunk pops open.  The light flickers on to reveal a 4-10 shotgun.  "Happy Birthday!" Dad grins.

"Oh."  I say.  After a short pause, I follow it up with, "Thanks" and walk back into the house.  I think I shot the thing at the skeet range like 3 times.

Fast Forward:  Tuesday, August 16, 2011.  Inside the ATP Gun Shop is a picture of Obama with the title "Gun Salesman of the Year."  (Slapping my knee.)  It's so true!  I'm wearing pink glasses, pink headphones, and just received my hot pink "I Shot Like a Girl" t-shirt.  And I'm tearing out the heart of the paper dude in front of me. 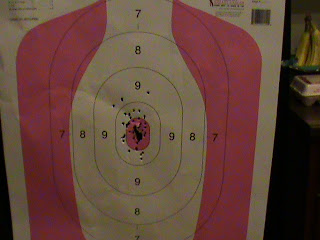 So, I suppose the message is clear.  If you were thinking about breaking into my house, prepare to meet your Maker.  Because we live in South Carolina, folks, and the Castle Doctrine applies here.  Oh yeah.  I'm proud to be a South Carolinian, y'all.
Posted by Perrin Cothran Conrad at 6:35 PM No comments: