Back Home on the Water 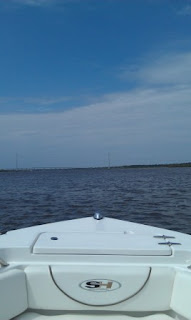 I grew up around salt water.  Fishing, crabbing, throwing a cast net, and feeling the salty spray in the bow of a boat were all part of my upbringing.  My family has been without a boat that we could all enjoy for nearly twenty years.  During these decades, life has interfered with its mandates and diversions, some joyful and some onerous.  While visions, smells, and sensations of brackish rivers were distant, they could be encouraged in my memory during quiet times of solitude and longing.  But now there is a new boat in the family, and I will no longer be reliant on that quiet longing.

This weekend, I returned to a home deep within myself.  This home is a hidden place that is only revealed when I am in the element of salt water, afloat and aware of God’s creation around me.  I was reminded of a teenage girl who was comfortable with adventure, who was cautious but unafraid.  Yeah.  I’m that girl.  I’m that girl who came face-to-face with a small shark attacking the bait on the end of my crab line.  I shook him off of the white piece of string and roared at him to find his chicken somewhere else.  I’m that girl who knew how to find schools of bait fish and fan a cast net out over them like nobody’s business.  I knew how to clean a crab, what the dead man’s fingers were, and what was good to eat.  I had a fierce step dancing contest with a feisty live crab on the kitchen floor once, too.  He did not want to go in that pot!  But he did, and we ate him.  I also navigated deep waters offshore with lines trolling behind, dodging sharks that competed for our dinner.  That girl was me.  I had lost touch with that girl over the years, like a childhood friend who moved away and never wrote.

My son got so excited when we saw porpoises in the water on Saturday.  This is only the beginning, I thought.  There are so many more amazing things to see.  This is my home, and now it is his.  When I pointed to the marsh to describe something in the pluff mud, he asked, “Mommy, what’s pluff mud?”  How could any child of mine not know what pluff mud is?  I used to jump out of the boat and squish into this stuff so I could catch fiddler crabs with my bare hands.  At least he’s learning now.

I re-enter an experience long forgotten but so much a part of who I am.  Heart wide open, face turned to the sky, and arms outstretched to praise God from whom all blessings flow, I thank Him for the beauty of His salt marshes and the profound solemnity teeming with life that is the ocean.  And I thank my dad, for bringing me up to love and respect this part of creation.  Now, I only pray that I can instill the same or greater appreciation in my son.

He told me that going on the boat was the “best thing that ever happened” to him, so we are off to a good start.

Posted by Perrin Cothran Conrad at 9:48 AM No comments: